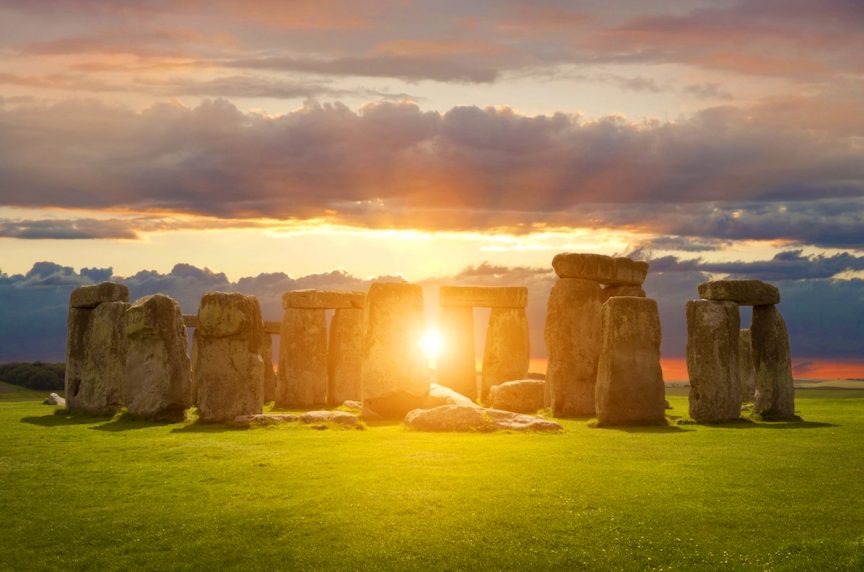 Stonehenge in Wiltshire was built over 5000 years ago in varying stages over a 1000 years. It is a complex Neolithic site. Some of the clues enabling the archaeologists to chronologically date it for example are the antlers found on the site used to dig holes which can be radiocarbon dated.

Many aspects of Stonehenge, such as how it was built and what the purpose of it was, remain a subject of debate. A number of myths surround the stones. Stonehenge was produced by a culture that left no written records.

The alignment to the sunset of the winter solstice and the opposing sunrise of the summer solstice/ Litha and the natural landform at the monument’s location followed a line through the centre of the circle and it is thought it may have inspired its construction. The excavated animal bones suggest that people may have gathered at Stonehenge for the winter rather than the summer solstice. Although there are many astronomical associations, the significance of these is much speculated and debated about.

Stonehenge itself sits in a much larger circle of ditches and mounds and an avenue draws up to its entrance where a stone sits in the middle called the Heel stone. So we don’t know what the stone circle meant to the Neolithics’ but a historian in the 18th century noticed that the central axis of the circle lined up with the Heel stone and then in turn with the horizon, which in turn lines up with the sun as rises on the Summer Solstice.  So what we do know is that it’s design involves an early form of astronomy.

The setting sun on the winter solstice bursts through on the opposite side in exactly the opposite position showing that this was the turning point in the year and both these events being the most significant time to the farmers of that era.

Of the middle tall structures (inner HorseShoe Trilithon) there are three still standing. One of them was reconstructed in the 1950’s being set in concrete.  Altogether there would have been five standing originally. It is here where the alignment has its significance.

Surrounding these are the circle of smaller stones called the blue stones. They were sourced over 225km away in the Preseli Hills in South West Wales. There is a debate as to whether they were transported by people or by glaciers several million years earlier. If transported by people it is thought it could have been via the sea journeying up the Severn estuary and then overland or just by overland. Even these small stones weigh around three or four tons, and they were moved even before the wheel was invented.

The outer Sarsen stones weigh around 25 tons, and were sourced more locally i.e. the Marlborough Downs which was still 25km away. Some think that these could have been moved part of the way by river. They are harder than steel and were shaped into these tall uniform blocks using stone tools. Then they were pushed into pits before being pulled upright.  The stones on the top were called lintels and actually had joints like woodworking joints with grooves in the top lintel that fit onto bumps on the top of the uprights, and in turn the top lintels fit together like a jigsaw, all of which held them securely in position. Also each post had to have its height carefully calculated so that they were all level even though the ground that it was built on wasn’t level.

Some really informative videos are worth a watch regarding this world heritage site Stonehenge A 360° View of Stonehenge.  It is speculated that because some of the stones are missing there is no guarantee that Stonehenge was ever finished being built. However after the hot summer of 2014 dry patches became visible on the ground where the original missing stones once stood, and therefore it is now believed that the full circle was indeed completed as mentioned in this article in the Guardian  and here on youtube Studying the mysteries of Stonehenge.

Take a virtual tour of Stonehenge on the English Heritage site.

Why not join us for a Summer Solstice on-line event/ritual on the big day.