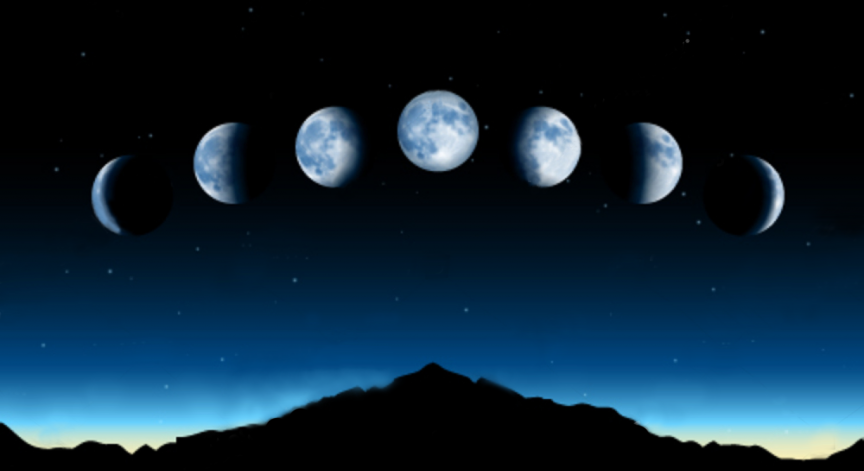 The moon looms large in folklore, urban legends, and myths from around the world. But today we talk about the new moon.

But first here are some facts about the New Moon:

Waxing is “Maxing,” or growing with light until a full moon is reached. Waning is the opposite, or decreasing after a full moon, and is always illuminated on the left but in the southern hemisphere, it is reversed. Then, there is a waxing or waning Gibbous moon, which means more than half of the moon is illuminated. A Crescent moon is when it is less than half illuminated.

Moon phase gardening is an idea as old as agriculture, popular in folklore and superstition, but there are scientific ideas to back it up. The Gravitational Pull Influences Moisture in the Soil.  Just as the moon pulls the tides in the oceans, it also pulls upon the subtle bodies of water, causing moisture to rise in the earth, which encourages growth.

At the new moon, the lunar gravity pulls water up, and causes the seeds to swell and burst. This factor, coupled with the gradual increasing moonlight creates balanced root and leaf growth. And so too does the moon also have an effect on our bodies and emotions, as according to H. Mitchell’s, Journal of Biological Chemistry, the brain and heart are composed of 73% water.  The full moon can feel like a bit of a disruptive time, resulting in more erratic behaviour, tension, or tiredness. You may find yourself feeling anxious or emotionally upset. Research has shown that we actually sleep less on the full moon. Therefore, for our own sake alone, it makes sense to commence something when we feel stronger, to start a project when more energy is needed and available. But along with how WE feel if it also means other people are more open and receptive to something new.

The new moon is all about setting goals and intentions. As the moon grows in the first half of its cycle, you may notice an increase in energy and motivation. “During this growth, or waxing phase, people will intuitively start new projects, take action, and refine. “The moment the moon begins increasing in size, we can feel a sense of renewal and possibility.”

When casting a spell the power increases if you consider what astrological sign the moon is in. Think about what planets are surrounding the moon at that time and what energies these planets have. The star signs below will help you when performing your magic:

Moon in Aries – personality, beginnings and matters of self