A beautifully boxed gift especially created with Libra in mind. Libra is an air sign ruled by Venus, so what would make a better present than the stunning Opalite pendant & a beautiful Opalite Power Bracelet, a sweet-smelling midnight rose candle, plus a Libra astrology general profile. 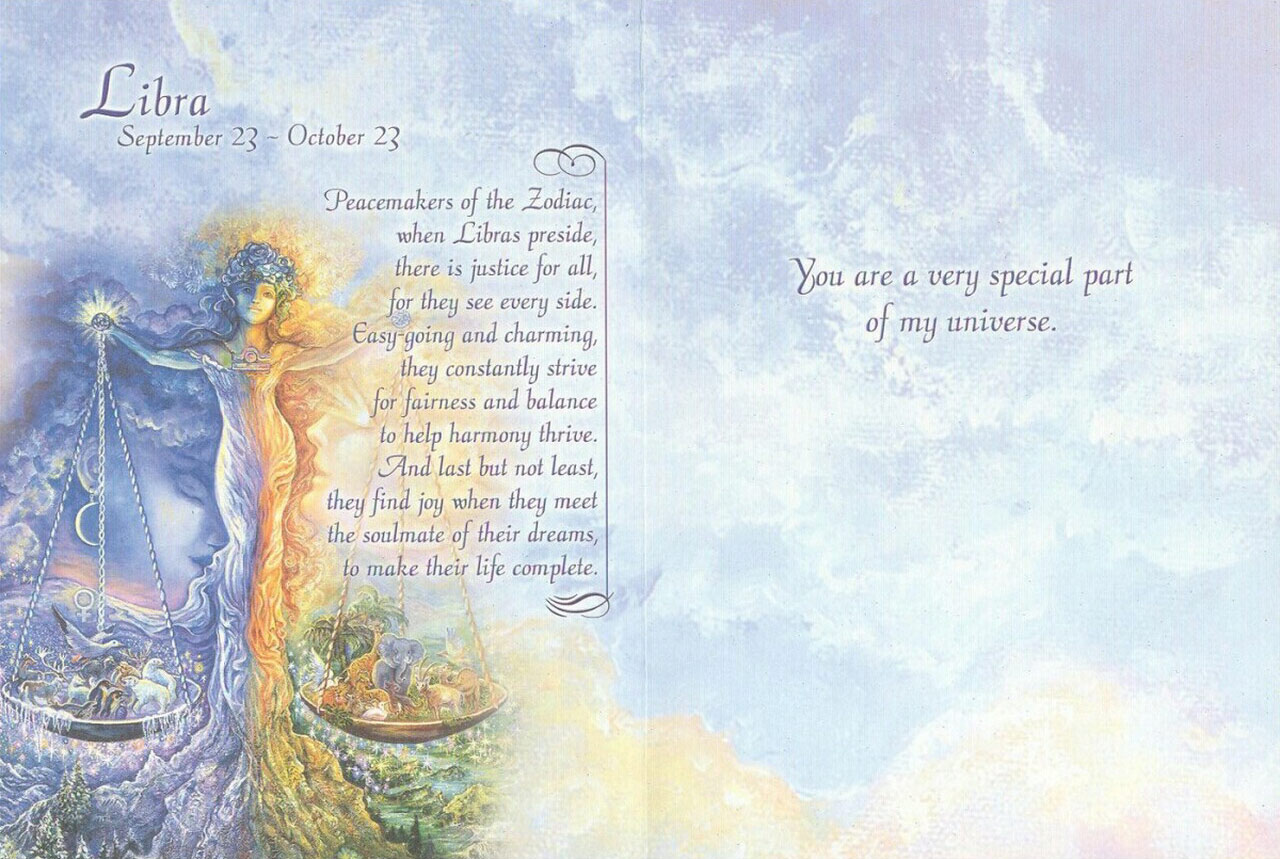 We celebrate the Sun arriving in Libra around the 23st September which is when the Libra Birthday season starts.  Don’t panic we can have your beautifully packaged present dispatched to the recipient the next day, postage takes around 5 days, with a handwritten card designed especially for your favourite Libra person.
All you will need to do is provide us with your message and their address.  Alternatively we can deliver it to you.

INCLUDED IN THE GIFT:- OPALITE PENDANT The sign of Libra transits from around September 23rd to October 22nd, it is the seventh sign of the Zodiac wheel. It is influenced by the element, air, and by its special relationship with Venus and is represented by the astrological Scales. It is the seventh sign of the Zodiac, and the first one of the upper half of the wheel. It is preceded by the six signs of the lower part of the Zodiac. Libra is the opposite sign to Aries. In Libra there is no more, ‘I’, it is now ‘We’. While Aries proclaims ‘I am’, Libra declares, ‘We are’.

Here are some revealing traits of LIBRA that explains them perfectly.

JUSTICE & BALANCE – It is the astrological representation of justice and balance. It symbolizes harmony in personal relationships and in communal life. Libra represents the development of the perception of the other and the joy of being in the company of others. This perception is brought about as a result of a mindful and considerate perspective.

The element of nature, corresponding to Libra is the air. Volatile, transparent and unpredictable. Individuals born under the air signs, Gemini, Libra and Aquarius are rational, logical, intellectual, extroverted, agile, and eloquent. They need to flow freely like the wind. They assess reality from the heights of the mind.

CEREBRAL – They tend to be wary of the spontaneity of the fire signs, the practicality of the earth signs and the emotionality of the water signs. Like people born in the fire signs, Aries, Leo, and Sagittarius, the Arial ones express themselves without reservation. However, those of the fire signs act. Whereas those of the air signs think. Librans tend to be cerebral and emotionally detached, as are all the natives of the other air signs. It is therefore paradoxical that they have a tendency to be dependent on the other, to manage their day to day existence, and to achieve personal growth. They often feel that they need symbiotic connections and thus make many concessions to maintain the stability of their relationships. The Libra sign is located at one of the extremes of the tropical Zodiac wheel. The natives of the signs located in the first months of the stations, Aries, Cancer, Libra and Capricorn, are audacious and devote their energy to satisfy their interests. This position helps Librans to put in use their aerial sense of independence and to temper their excessive concern for their partner’s reactions. Doing so they will free themselves from the preoccupation, with the effect, their words and actions may have on others, only then can they forge well-balanced relationships.

DIFFICULTY IN MAKING DECISIONS – The symbol for Libra is the Scales represented by the glyph. This symbol reflects the Libran’s equanimity, their sense of justice, and their capacity for conciliation. The scales also show their fluctuation between the two sides of the balance and their difficulty in making a decision. Libran’s psychic energy is masculine and active, Yang in Oriental traditions.

NETWORKERS – While we all possess both masculine and feminine energies, astrology reveals the predominance of one of them in each sign. Librans Yang energy reinforces their Arial extroversion, and their need to be in constant interaction with other people. It promotes the achievement of goals through the intellect, the facility to network, and the ability to act as an intermediary for people or institutions. The personality traits reflected in Libra, especially the ‘we’ attitude, not usually common to air signs, can in part, be explained by the intimate relationship of this sign with its ruling planet, Venus, its namesake and is the Roman goddess of love, affection and beauty. The Libran Venus symbolizes the ties made from the heart and the power of seduction. Libran people exude attractiveness, friendliness, and refinement. As a goddess, Venus was unconcerned with practical issues but focused rather on sensuality and pleasure. She enjoyed a life of luxury and it was not ready to sacrifice pleasure for the sake of work. Like her Librans are prone to use their sensuality and seduction powers to stand out socially and satisfy their whims. An exaggerated identification with those divine energies can increase Librans dependency on others as a means of achieving personal satisfaction. Insured, the symbolic ‘we are’ of Libra and its relation with Venus and the Scales, reflects the Libran and sense of beauty and justice and their capacity to bring harmony to personal relations. Their Yang and Airey energies urge them to be more independent and to extend their connecting talents to their community and society.

ACTION – The inner nature of the sign is perceived through the external manifestations of human form and action. Physically, intellectually, and emotionally, each of us bears the signature of our individual celestial disposition. How we look and how we behave at different stages and in different circumstances in our lives is what characterizes us as born in a particular sign.

THE LIBRA BODY – Astrology finds in the parts of the body connections to the metaphysical world of the Zodiac. Each sign has a physical correspondence. Those links follow a descent from the head in the first sign Aries to the feet and the 12th sign Pisces. These connections are the pillars of medical astrology. Libra as the seventh sign is associated with the lumbar region and the kidneys. These organs ensure the metabolic balance of the body mirroring the Libra search for balance and harmony in life. Venus, the goddess and ruling planet of Libra is well known for her voluptuous and sensuous body. People born under Libra are very attractive and usually, have well-proportioned bodies, that give a sense of lightness when they walk. They are normally healthy individuals, but they need to control their tendency to overindulge their palettes. Librans usually work on whatever health and weight problems they have brought on by an excess fine food and drink. Such features are not compatible with a glamorous appearance, which is so important too. Working or living alone for too long a period can have a detrimental effect upon their general health. Good company and serene surroundings have a salutary impact on their physical and psychic wellbeing. When ill, Librans put on a brave face and soon recover because they do not like creating a lot of fuss. Librans are not fond of vigorous sports, they prefer graceful aesthetic activities in which they can sport attractive outfits and be in beautiful environments. Horseback riding, golf and skiing suit them best. They enjoy long walks with good company in scenic surroundings.

>>> This is a taster of what is on the Libra Astrology Profile Scroll which is 3 x A4 in length. 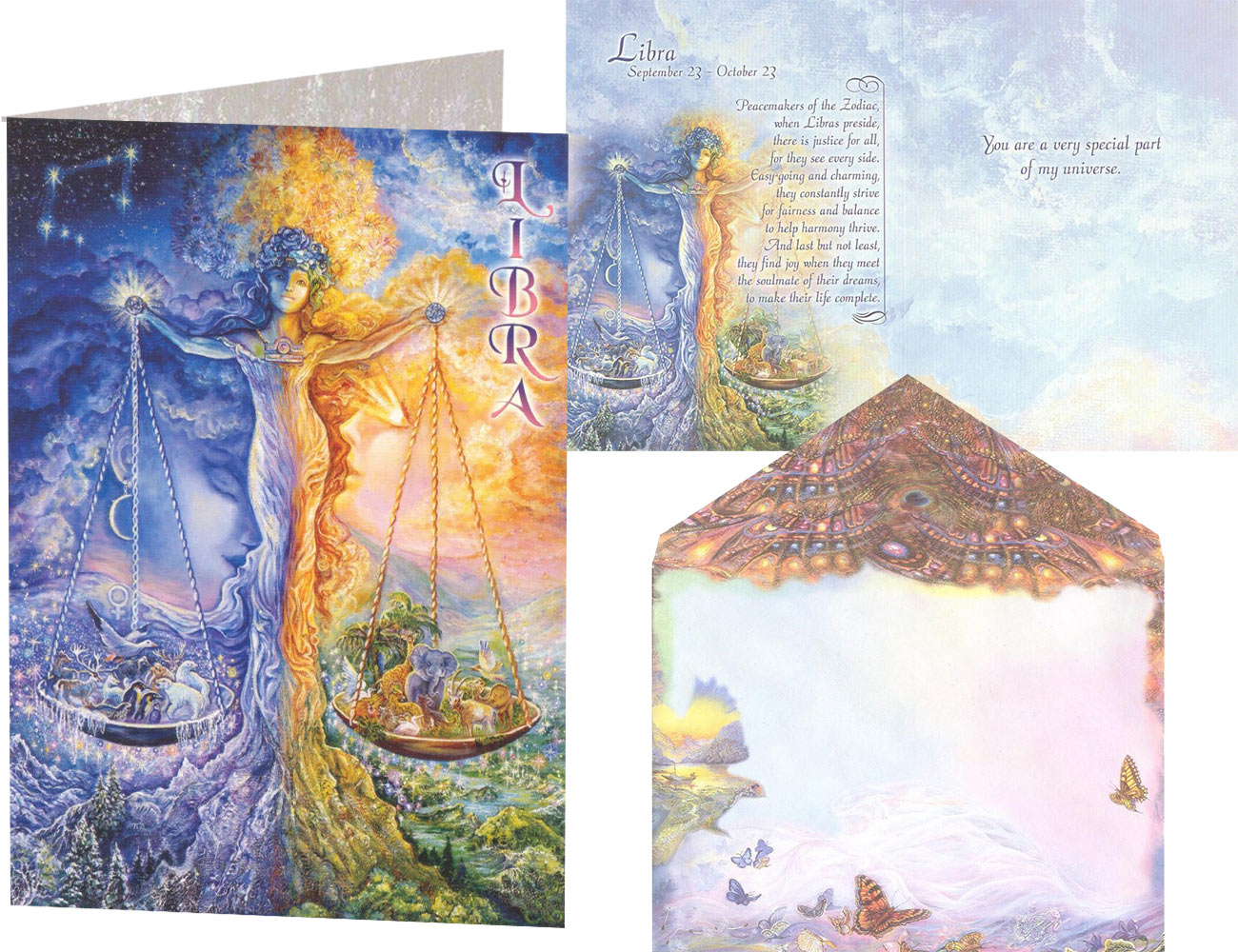 Libra Zodiac card by Josephine Wall, including inside, and envelope.