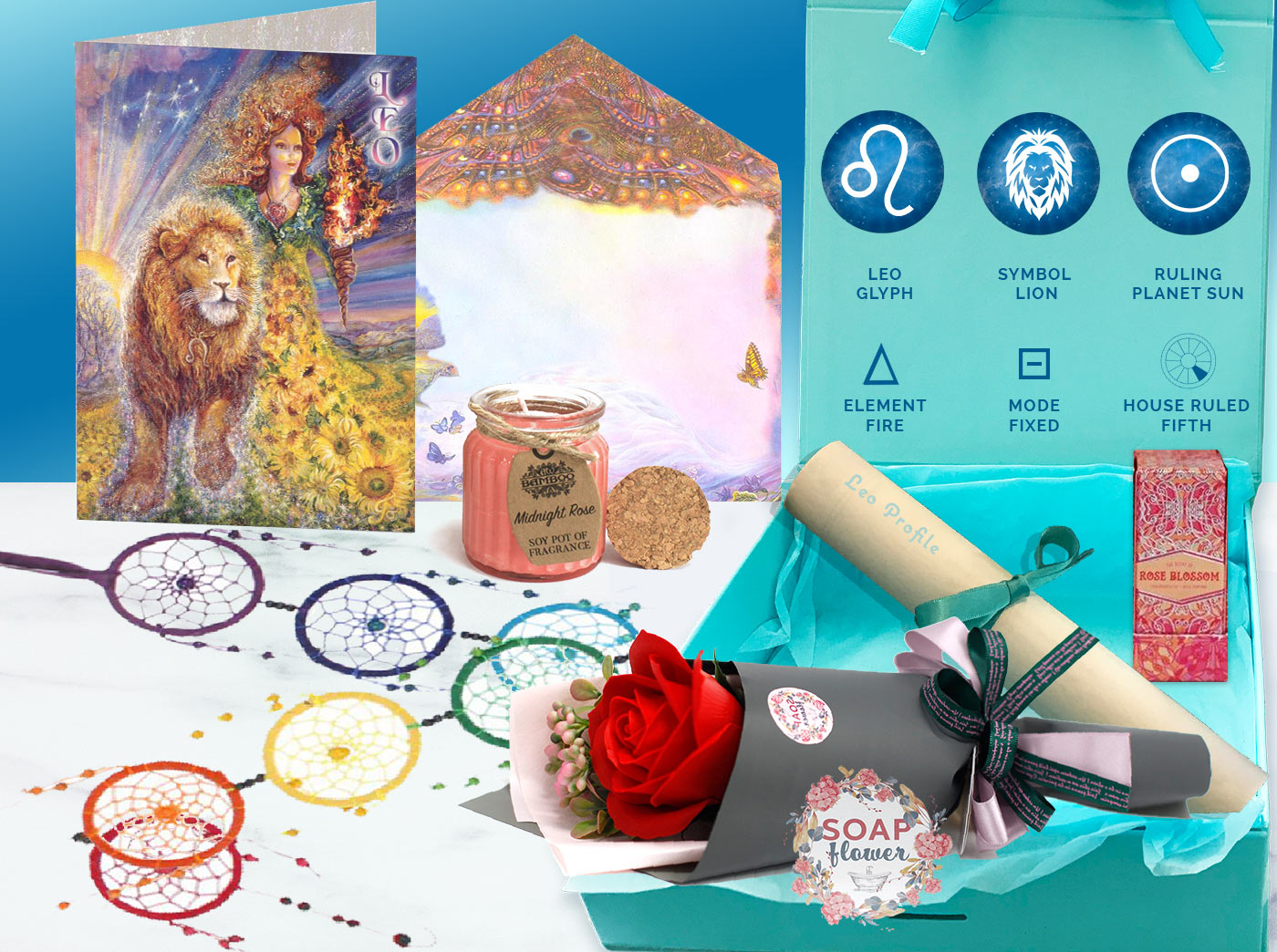 A beautifully boxed gift especially created with Leo in mind. Leo is a Fire sign ruled by the sun, so what would make a better present than the stunningly colourful dreamcatcher with spherical chakras to mimic the sun & a beautiful Rose Soap Flower, a sweet-smelling candle, plus a Leo astrology general profile. 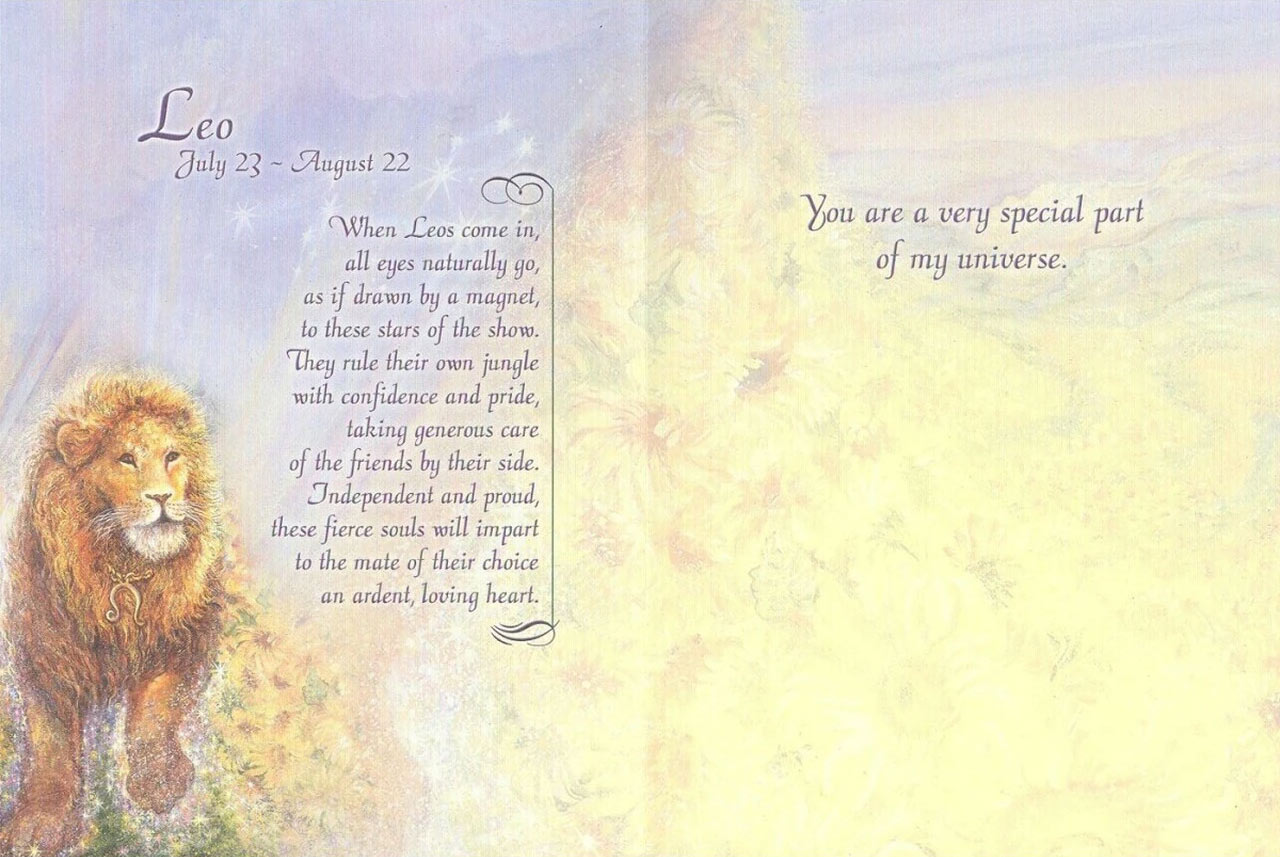 1x Soap Flower for your bath

We celebrate the Sun arriving in Leo on 23rd July, when the Leo Birthday season starts.  Don’t panic we can have your beautifully packaged present dispatched to the recipient the next day, postage takes around 5 days, with a handwritten card designed especially for your favourite Leo person.
All you will need to do is provide us with your message and their address.  Alternatively we can deliver it to you.

INCLUDED IN THE GIFT :- Leo is influenced by its inspiring element, fire, and the presence of the astrological lion. A special relationship with the sun, the sign of Leo transits from July 23rd to August 22nd. It is the fifth sign of the Zodiac wheel.

Here are some revealing traits of LEO that explains them perfectly.

FULL OF VITALITY & ENTHUSIASM – Leo takes the stage convinced that being, having, thinking, and feeling are more than enough to seize the world. This still young sign makes people feel an urge to glow, to parade their innate value and personal importance. Leo natives are the astrological representation of the human being as the center of the universe.

Individuals born under the fire signs, Aries, Leo, and Sagittarius are spontaneous and full of vitality. They rely upon their inspiration and their enthusiasm to get what they want. They are direct and audacious, no matter what they see life optimistically, they burn up problems with the fire of their egos and continue defiantly on their way they exude self-assurance, but also demonstrate little sensitivity towards others.

THE DOERS OF THE ZODIAC – They express themselves without reservation. Fire signs take action. Lions are eminently doers and they are used to demonstrating their enthusiasm as if with fireworks, they are always ready to participate in all kinds of sparkling projects.

MAGNANIMOUS AND GENEROUS – The symbol for Leo is the lion and his glyph represents the mane of this majestic king of beasts. The glyph is also associated with the snake signifying wisdom and the intellectual romance of the sun. Honoring their Royal association Leo people take pride in their self-importance and are as magnanimous and generous as is the lion king.

However, they are not as self-assured as they would have others believe, and so they try very hard to impress with their awkward performance. The psychic energy of Leo people is masculine and active, Yang in Oriental traditions. While we all possess both masculine and feminine energies, astrology reveals the predominance of one of them in each sign.

Yang signs are predominantly proactive and extroverted. This energy is particularly evident in Leo natives as a result of their urge to act their desire, to be the star of life’s play. They tend to live for the applause, rather than just finding it sufficient to be. As they age people born under the sign of Leo, become easygoing, overcoming the excessive importance they give to the approval of others.

COURAGEOUS & NOBLE – The traits reflected by Leo, can in part be explained by the intimate relationship of this sign with its ruler, the sun. This central star provides vital energy and light to all the planets of the solar system. It shines all of us, but it is particularly intense for Leo people. The only sign over which it rains.

In our Occidental solar astrology, the sun dominates the natal chart. It is the king of the chart. Its light brings illumination to all other components of the chart.  The sun’s brilliance bestows upon Leo’s a strong sense of individuality, a dominant will, and an irresistible desire to create. Leo people, like this star, have a need to radiate their internal energy. Leo is a young side and therefore Leo has expressed themselves through relatively primary impulses. They visualize themselves as the sun shining upon the demons of darkness. And who are these demons. All those including themselves were not impressed by Leo’s brilliance. Their psychic youth explains their need for attention and their urge to demonstrate the nobility of their nature. Leos are convinced that their role is central to the drama of life, but like the courageous and noble lion, they can also be ferocious and brutal.

Only by learning to appreciate the world around them, and by considering the opinions of other people around them, will they become powerful and noble lions and then will truly shine like the sun that they are.

LEO IN ACTION – The inner nature of the sign proceeds through the external manifestations of human form and action. Physically, intellectually and emotionally each of us bears the signature of our individual celestial disposition. How we look and how we behave at different stages and in different circumstances in our lives is what characterizes us as born in a particular sign.

THE LEO BODY – Astrology finds in the parts of the body connections to the metaphysical world of the Zodiac. Each sign has a physical correspondence. Those links follow a descent from the head and the first sign Aries to the feet and the 12th sign Pisces. These connections are the pillars of medical astrology. Leo, as the fifth side is associated with the heart, the spinal cord at the back. The sun, Leo’s ruling star relates to vital energy. Leo’s link with the heart shows the generosity of heart of the egocentric lions. They are happy, energetic, and generally have robust health. When they feel well, they look splendid, but when they don’t, they lose their sunshine. They become particularly vulnerable when they feel unloved and appreciated. Leos try to mask their physical discomfort through bravado. When they fall ill, they make every effort to recover quickly so as not to lose the reputation for invincibility.

They tend to be slim and have large almond-shaped eyes and abundant head of hair and a strong voice. They move gracefully and have a proud posture. Physically Leos can excel at any sport but does not take well to long hours of practice. They are attracted to classy sports for which they can wear eye-catching outfits. Archery, sailing, horseback riding, or golf, figure among their favourites.

>>> This is a taster of what is on the Leo Astrology Profile Scroll which is 3 x A4 in length. 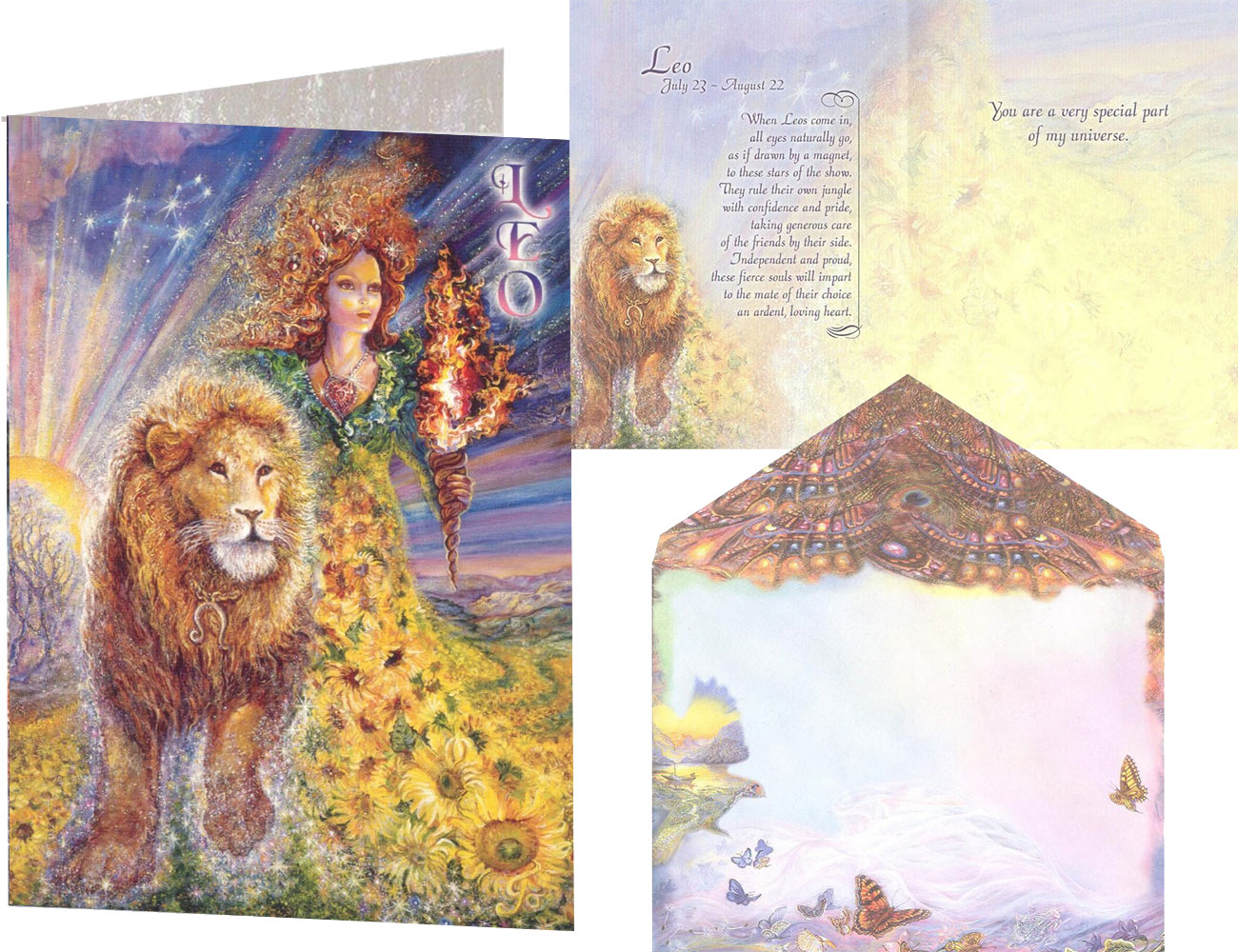 Leo Zodiac card by Josephine Wall including inside and envelope.